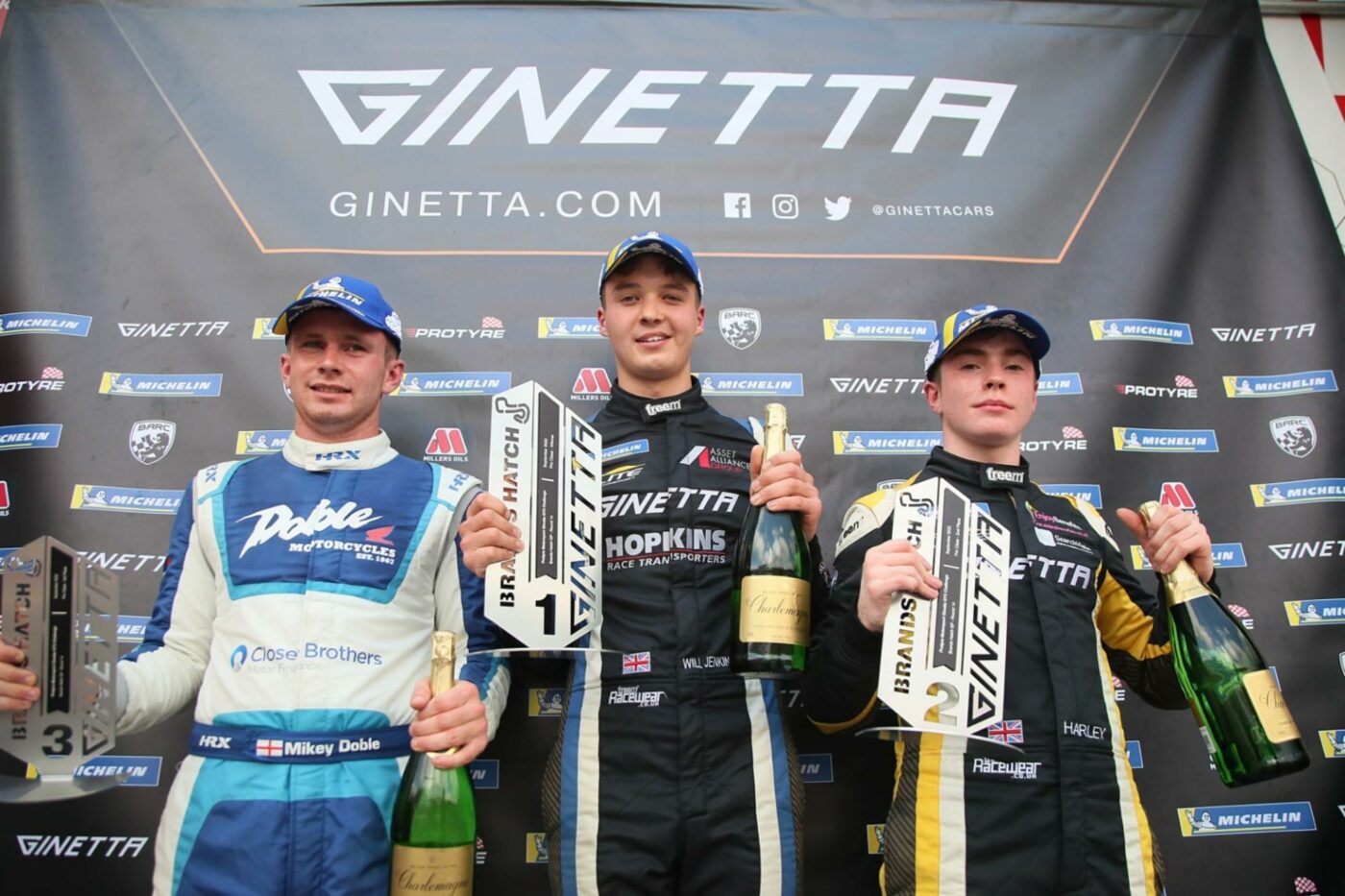 Haughton (Elite Motorsport) headed into the weekend having taken six pole positions from the last eight on offer, and duly added two more to his tally in qualifying on Saturday. Team-mate and title rival Jenkins was second fastest ahead of Doble (Xentek Motorsport).

An entertaining opening lap of race one saw the lead change hands multiple times, however it was Haughton who emerged from the GP loop in front. Jenkins stayed close across the first half of the race, before the leader stretched his legs to a near three second winning margin.

Doble closed on Jenkins in the final few laps but had to settle for third at the flag ahead of Will Orton (Race Car Consultants). Hage took the lead at Druids on the opening lap, however a wide moment at Hawthorns dropped him to ninth and he had to fight back to fifth.

Donaldson was running in the top six until an unfortunate spin, which left Connor Grady (Xentek Motorsport) to fill the spot after passing Harry Mangion (Elite Motorsport). Dave Sutton (Team Avago) and Ignazio Zanon (Raceway Motorsport) were next up.

Tenth overall was White as he completed a dominant lights-to-flag Am class win. Santi made it a Raceway one-two, having been sat behind a couple of Pro drivers through the race, while Gerson Zarpelao (Xentek Motorsport) moved up from fifth on the class grid to complete the podium.

Race two on Sunday morning featured one of the most enthralling race win battles of the season so far. Haughton converted pole into the early race lead, with Jenkins immediately latching on to the tail of his team-mate to commence their duel for victory.

Jenkins dived down the inside into Paddock Hill Bend on lap five, however his lead was short-lived as Haughton hit back at the next corner. One lap later and Jenkins was able to make a move stick, getting a run out of Paddock before slotting down the inside at Druids.

From there it was roles reversed as Haughton tucked himself under the rear wing of the leader’s Ginetta G40. His attempts to regain the lead were paused by the emergence of the safety car, called to allow the recovery of two stricken cars.

It ended up being a one-lap shootout to the chequered flag, with Jenkins producing a great defensive performance to secure the race win. Haughton found himself trying to attack and defend on the last lap, with Doble, Orton and Donaldson hot on their heels at the chequered flag.

Hage was in the lead pack prior to the safety car, however a trip through the Paddock gravel trap at the restart dropped him to seventh at the finish behind Mangion. Grady, Sutton and Zanon rounded out the top ten, with Oliver Cottam (Alastair Rushforth Motorsport) and Sam Harvey (Xentek Motorsport) completing the Pro finishers.

Santi grabbed the Am class lead on the opening lap, though a spin at Surtees next time around allowed White back to the front. He led every lap from there, while issues for a number of the class contenders meant it was Bal Sidhu (Xentek Motorsport) and Santi who completed the podium.

The final race of the weekend featured another epic duel for the victory between the top two. Jenkins converted pole into the race lead and soaked up a lot of pressure from Haughton over the opening eight laps of the race.

Their battle came to a head next time around, with Haughton attempting a move into Stirlings corner. Contact between the two resulted in Jenkins spinning off into the gravel trap, with the position of his beached car resulting in a red flag conclusion to the race.

Haughton therefore won on the road, however a post-race penalty for his part in the incident dropped him to eighth in the revised result. Taking a first victory in the championship therefore was Doble, who had slipped to fourth on lap one but crucially got ahead of Orton on lap three.

Orton picked up his sixth podium finish of the season in second, while Donaldson fought back superbly from eighth at one stage to cap off a breakthrough weekend with a maiden podium. Hage, Grady and Mangion ended up classified in the top six, with Zanon ahead of Haughton in the final result.

In the Am class, Sidhu moved up a spot on the opening lap and went on to lead throughout for his first win of the season. Santi followed him home as White fought back from fifth in class on lap one to finish in third, those two completing podium hat-tricks for the weekend.

Phil McGarty (Alastair Rushforth Motorsport) and Karim Sekkat (Elite Motorsport) were next up as they both recorded their best results of the weekend, while on his first appearance of the season, Mike Doble (Xentek Motorsport) took a best of fourth in class in race one.

Full race results from the weekend are available here: https://www.tsl-timing.com/event/223605