Will Macintyre, Kanato Le and Josh Rowledge took a win apiece during an exhilarating weekend of Michelin Ginetta Junior Championship racing at Snetterton this past weekend (13/14 August). 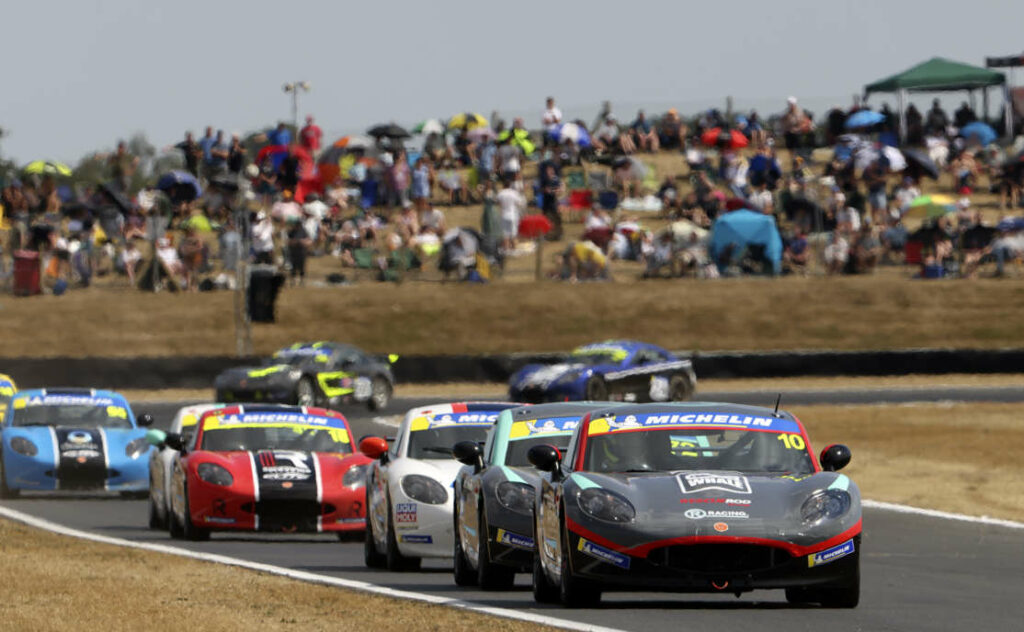 Returning to a circuit he won at last year, Liam McNeilly (Fox Motorsport) scored his first pole position of the season in qualifying on Saturday morning. Sonny Smith (R Racing) was second, meaning he’s now qualified inside the top two in five of the six sessions this season.

As Elite Motorsport’s rookie duo Macintyre and Le completed the top four on the timesheets, Maurice Henry was fifth quickest and also made it a double pole for Fox Motorsport as he took top spot for race two on second fastest times.

The opening race of the weekend was one of the most exciting of the season so far, with four different drivers leading at one stage. McNeilly led the field through Riches for the first time as Smith dropped back from second to fifth on lap one, with Macintyre and Le moving up to challenge the leader.

Macintyre got ahead through the sweeping Coram bend on lap three, with McNeilly losing a further spot to Le. The latter was into the lead soon after though and McNeilly also attempted a move on Macintyre into Murrays, however that just resulted in a loss of momentum for them both.

Harri Reynolds (Assetto Motorsport) and Smith took advantage to get ahead of them both, however it all changed again. on the next lap. Le and Smith fell down the order after contact, with Reynolds therefore leading the field into the final lap. He wouldn’t stay there to the finish though.

Macintyre and McNeilly got through around the twisty infield section and went on to have a drag race to the chequered flag, with Macintyre getting his third win of the season by just 0.042s in a photo-finish. Reynolds was hot on their heels to complete the overall podium.

Elite Motorsport team-mates Joe Warhurst and Aqil Alibhai couldn’t be separated throughout the race as they finished fourth and fifth, with championship leader Rowledge (R Racing) following them home as he recovered from a tough qualifying session.

Freddie Slater (R Racing) rose from 12th to sixth in an impressive opening lap and went on to complete his first ever car-race in seventh. He got a trophy as well, finishing second in the rookie class behind Macintyre, with Mckenzie Douglass (Elite Motorsport) joining them on the podium.

Le and Smith recovered to finish ninth and 11th respectively on the road, however the latter was disqualified from the result for his part in their incident. Zac Meakin (Preptech UK) therefore completed the top ten ahead Luca Hopkinson (R Racing), while Assetto Motorsport duo James Wyres and Liona Theobald took seasons’ best results in P12 and P13 respectively.

After failing to reach the finish in race one due to a last lap incident, Henry was keen to make amends from pole position in race two. He led through the opening lap, however next time around Macintyre got a run out of the Bomb Hole and grabbed the lead through Coram.

Henry eventually slipped back to sixth by the end of lap three, with McNeilly and Le moving into the podium positions. A couple of laps later and McNeilly made his move with a dive into Riches, however an opportunistic Le followed him through and then got into the lead through Coram.

As Le went on to take the chequered flag first for his second win of the season, Macintyre had worked his way into second place. He fell back on the penultimate lap though, with McNeilly ultimately replicating his race one result in second.

Smith gained two places on the final lap to complete a charging drive from seventh at the end of lap one to ultimately finish third. Henry was fourth on the road, however a one second time penalty post-race put him behind Warhurst and Rowledge, who had enjoyed a close battle throughout.

Alibhai was next up, while Reynolds joined Macintyre in losing ground in the closing stages, the duo falling to eighth and tenth at the finish. Rookie podium finisher Douglass split them in the result, while Meakin just missed out on another top ten result.

Luke Watts (R Racing), Adam Brown (Ultimate Speed Racing) and Alisha Palmowski (Preptech UK) were next up as they secured strong results to bounce back from race one retirements, while Slater ended up 15th having earlier been a presence in the top ten once again.

The final race of the weekend took place on Sunday afternoon, with the action televised live on the main ITV channel. Le’s race two win meant he started from pole position and he went on to lead the field through the opening few laps, as a five car train formed behind him.

Le’s defences were breached on lap four as Rowledge dived down the inside into Riches, with the former leader eventually getting shuffled back to sixth. Rowledge then held station at the front until a phenomenal lap seven, when four different drivers held the lead at one stage.

Smith picked off Rowledge into Riches, before losing out to McNeilly at Agostini. It was then Macintyre’s turn to move to the front through Brundle, though at the same corner one lap later it was Rowledge who moved his way back to the lead of the group.

That proved to be the crucial move of the race for him, as he managed to break away from the group on the final lap to secure his fifth win of the season. Behind, seven cars were battling for the final two podium positions, with Macintyre leading the group to complete a great drive from tenth on the grid.

The destination of third place was decided at the final corner. McNeilly muscled his way down the inside of Le, however in the process he opened the door for Reynolds to sweep past them both and secure his tenth podium finish of the season so far.

McNeilly finished up in fourth, however a post-race penalty put him behind Smith and Le. A remarkably close finish saw less than three seconds separating the drivers from third to 11th on the road, with Henry and Warhurst narrowly missing out on a top six finish.

Ginetta Junior scholar Palmowski was next up for her best result of the weekend, with Alibhai rounding out the top ten ahead of Watts. Meakin fought back well from a spin to 12th ahead of Brown, Slater and Douglass.

Wyres was 16th ahead of Ella Lloyd (Assetto Motorsport), who bounced back well having unfortunately failed to finish the opening two races. The result was completed by Hopkinson, Theobald and Flynn McHardy (Preptech UK), the latter having picked up a best result of P18 in race two.

Full race results can be found at https://www.tsl-timing.com/event/223203

The Michelin Ginetta Junior Championship season continues in less than two weeks’ time with a second visit of the season to the fastest circuit in the UK, Thruxton (27/28 August).