Ravi Ramyead and Marc Warren were once again the class of the field at Oulton Park this past weekend (11/12 June) as they continued their 100% winning records in the 2022 Ginetta GT Academy. 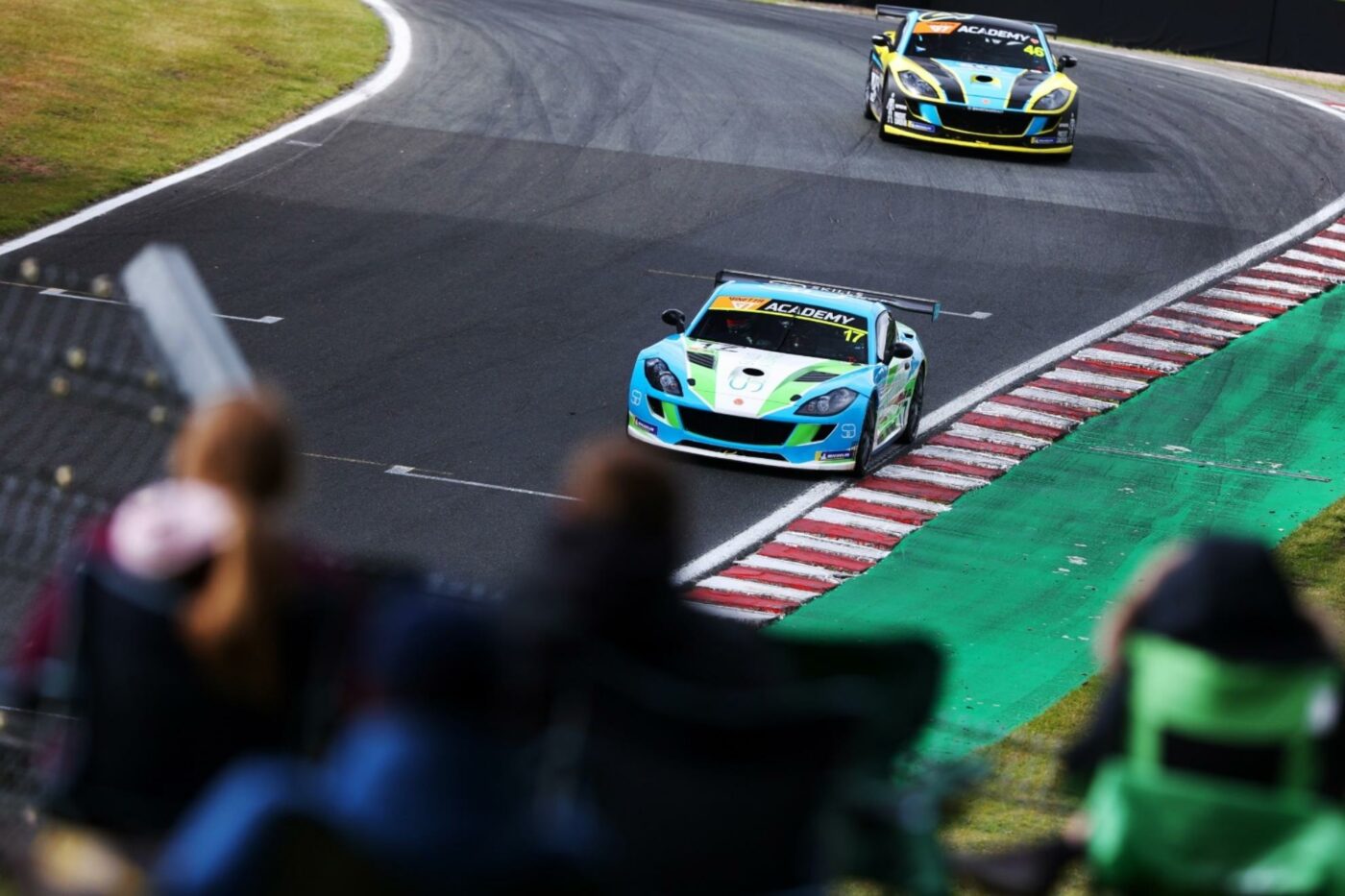 Warren (Raceway Motorsport) followed up his pole position in the previous round at Donington Park by topping the timesheets once again in qualifying, though only just as rookie contender Ramyead impressively lapped just 0.083s slower.

Those two locked out the front row for both of the weekend’s races, with Ramyead continuing his 100% rookie pole record in the process. Leo Karavasili (Breakell Racing) continued his own impressive qualifying form in third overall ahead of Thomas Holland (Raceway Motorsport).

The opening race on Saturday afternoon began with a brilliant launch for Ramyead putting him into the lead on the approach to Old Hall corner. Warren slotted into second, while a slow getaway for Karavasili cost him places to Holland and Nick White (MRM).

At the front of the field, Ramyead was able to keep Warren at arm’s length throughout the race to take the chequered flag in P1 overall for the first time. As both drivers picked up their latest class wins, Holland finished third on the road to complete a Raceway one-two in the GTA class.

Karavasili pulled off a late move on White to secure the final place on the GTA podium, while completing the top six overall after impressively gaining three places on the opening lap was Richard Sykes (W2R). Mackenzie Walker (Assetto Motorsport) was next up, with Michael Johnston (Century Motorsport) settling for eighth from a seasons’ best fifth on the grid.

Behind Alistair Barclay (SVG Motorsport), Maurizio Sciglio (Datum Motorsport) had a day to remember, converting a best qualifying of sixth to a maiden top ten race finish. Julian Wantling (Assetto Motorsport) followed him across the line, while rookie Jon Kearney was 12th on the road before the addition of a five second track limits penalty.

That dropped him behind Danny Dwyer (Xentek Motorsport) and Tom Hartley Jnr (Century Motorsport) in the final result, while Sebastien Dubois (Motus One) had to settle for 15th place after dropping out of the top ten in the early stages of the race.

The second race of the weekend saw the bumper 28 car field race in front of a big trackside crowd and live on ITV4. Warren got the best start to lead the first half of lap one, however Ramyead got ahead into the Hislops chicane and went on to hold the advantage through a mid-race safety car period.

Warren tried to mount a challenge late on, but Ramyead fended him off to complete his P1 double for the weekend. That result means both drivers have now won their classes in each of the opening seven races of the season to give themselves comfortable points leads with two events remaining.

The best action of the race came in the battles behind. From sixth on the grid, Holland impressively worked his way up to third overall and second in the GTA class, while a stunning move around the outside at Old Hall on Johnston netted Walker the final podium spot.

After slipping down to eighth on the opening lap, Karavasili fought back well to fifth overall ahead of Sykes, who worked his way up from tenth on the grid. Barclay picked up his best result of the season so far in seventh, with Johnston having to settle for eighth in the end.

Dubois scored a maiden top ten finish in ninth ahead of Sciglio, Dwyer and Wantling, while Steel produced a great drive to rise from 23rd to 13th and Lee Goldsmith (Century Motorsport) bounced back from a race one retirement to finish 14th.

In the rookie class meanwhile, Kearney was on course for second in race two until a moment at the hairpin ultimately cost him a spot to Dan Rathbone. Thomas Shelley was sadly forced to retire from the race, having finished fifth in class in the opener.

Full race results from the weekend are available here: https://www.tsl-timing.com/event/222303

The Ginetta GT Academy now heads into a lengthy summer break, with the championship returning to action back on the British GT Championship package at Brands Hatch over the weekend of 10/11 September.