James Kellett took both victories on offer in the Millers Oils Ginetta GT4 SuperCup at Thruxton. 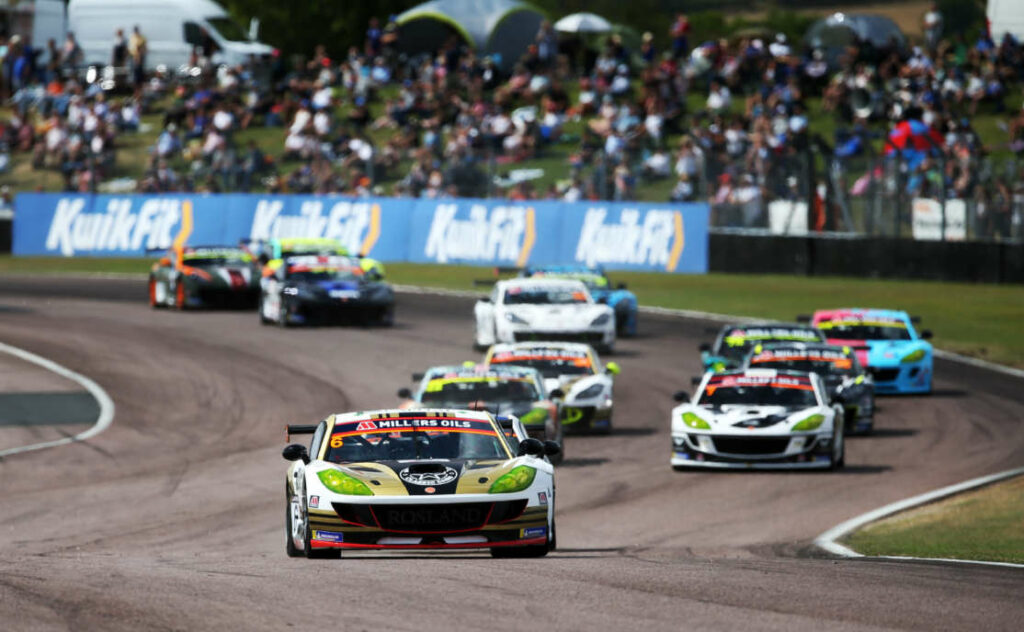 Kellett (Rosland Gold Racing by Century Motorsport) had taken pole position in each of the opening four qualifying sessions of the season, but his streak came to an end on Saturday morning as Tom Emson (Elite Motorsport) set the pace for his first pole in the championship.

The opening race followed that afternoon and began with Kellett sweeping into the lead into the Complex on lap one. From there, the two-time GT5 Challenge champion pulled almost four seconds clear at the front to move into double figures for race wins this season.

Millar gave chase as he finished up second, with Emson third. Leung converted class pole into a comfortable G56 Am win, with his class rivals Colin White (CWS 4×4) and Wes Pearce (Breakell Racing) battling away with the leading G55’s through the race.

Reade led the way for the opening half of the race before Blake Angliss (Rosland Gold Racing by Century Motorsport) pulled off a move around the outside at Noble to secure the G55 Pro victory. Conner Garlick (Xentek Motorsport) completed the podium ahead of James Taylor (Team HARD).

Unfortunately the start of race two on Sunday morning was marred by a serious incident for White and Mike Brown (Ultimate Speed Racing) on the run out of Church corner, leading to both drivers being hospitalised.

The race restarted later in the day with Kellett on pole position. Fending off early pressure from Emson, he pulled clear to complete a lights-to-flag victory by a large margin of 13 seconds.

That result that means he equals the championship record for most wins in a season, held by Tom Sharp, Tom Ingram and Harry King, while it was also a landmark 50th overall GT4 SuperCup victory for Century Motorsport.

Windscreen damage and the resulting limited visibility meant Emson was powerless to prevent Millar from taking second place, the reigning Ginetta Junior champion himself having fought back well from seventh place at the end of the opening lap.

Leung completed a perfect double in G56 Am as he ran fourth from start-to-finish, making it five wins in a row for him. Reade followed him home as he made it two from two in G55 Pro, with class rival Angliss sitting behind the G56 of Pearce through the race.

Garlick completed the G55 Pro podium in eighth overall ahead of Taylor, while unfortunate retirements for Morris and Warr meant that the G55 Am honours went the way of Townsend for the second time this season in a Fox Motorsport one-two with Duggan.

Due to the delay in Sunday’s schedule, the reverse grid final race of the weekend was unable to take place as planned. It is hoped that it can be added to the schedule for the next event at Silverstone, which takes place over the weekend of 24/25 September.

Full race results from the weekend can be found at https://www.tsl-timing.com/event/223403