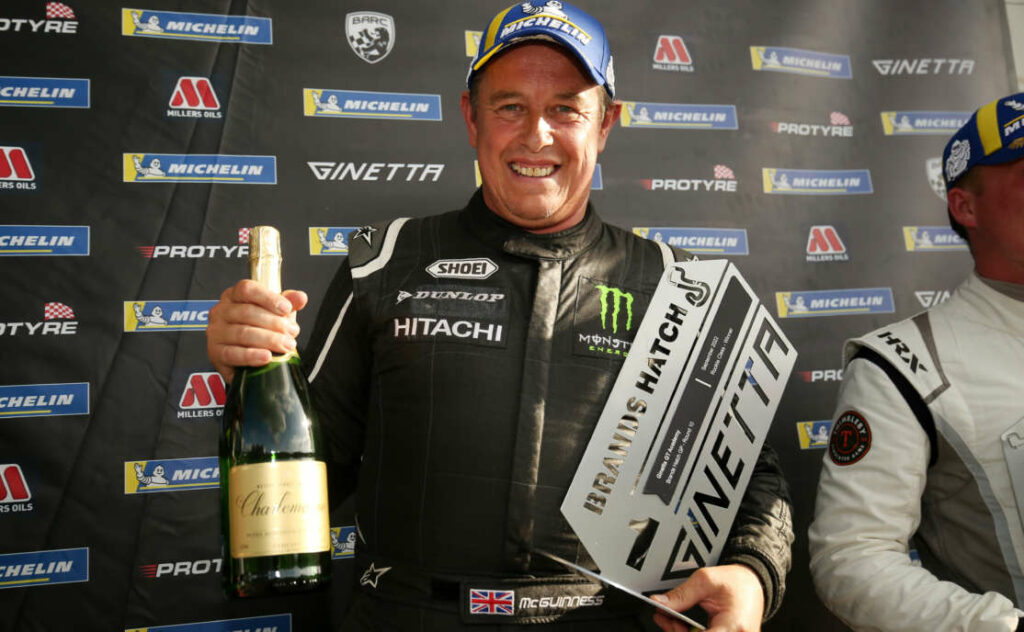 McGuinness, who is one of the most successful riders in the history of the Isle of Man TT with 23 victories and 47 podium finishes, made his Ginetta bow with limited racing experience under his belt, although he had previously driven a Ginetta G56 GTA at Croft last year.

With the support of the want2race team, including former Ginetta and BTCC racer Max Coates as a driver coach, McGuinness got up to speed around the shorter Indy circuit during Friday testing, before tackling the full Grand Prix layout over the weekend.

Showing consistent progress every time he went out on track, the Morecambe-based ace was unlucky to get caught up in an incident out of his control late in race one, before gaining eight places to 20th in race two. Saving the best for last, he kept out of trouble in an action-packed final race and rose to 15th overall to seal a memorable rookie class win.

As well as starring on the circuit, McGuinness made his mark off track too, proving to be a hugely popular addition to the paddock. On the Saturday evening, he conducted a special Q&A session in the Ginetta Race Centre, regaling his fellow competitors with stories of racing on the Isle of Man and talking them through an onboard lap of the 37.73 mile TT course.

John McGuinness: “It’s been epic. The Ginetta G56 GTA looks amazing and with the V6 engine, the paddle shift gearbox, there’s lots of really cool things about it. It was a tough weekend adapting and I never thought a win would happen, but I put the car in the right place at the right time and here we are.

“I didn’t know what to expect as it’s different to the bike world, but everyone has welcomed me with open arms and been really friendly. It’s been a breath of fresh air, I’ve always had the itch to race a car and I’ve had a taste now, so hopefully I’ll get another opportunity to drive the Ginetta.”

Max Coates – W2R Driver Coach: “John progressed really well with the Ginetta G56 GTA during the Friday test, but then faced a real challenge to learn the Grand Prix circuit in the car within just a 20-minute qualifying session.

“John knew the GP layout well, however the bikes are capable of much more straight-line speed so the braking and turning points are vastly different. That meant he had a lot to adapt to and only a handful of laps to do it.

“He’s naturally competitive and you could really see that determination to improve every time he went out. He was chuffed with the final race win and we were all were really pleased for him too, as he was a pleasure to have around the paddock.”