Tom Emson and James Kellett took two wins each during the penultimate meeting of the season at Silverstone (10/11 September) to ensure the Millers Oils Ginetta GT4 SuperCup title will be decided in the final round at Brands Hatch next month. 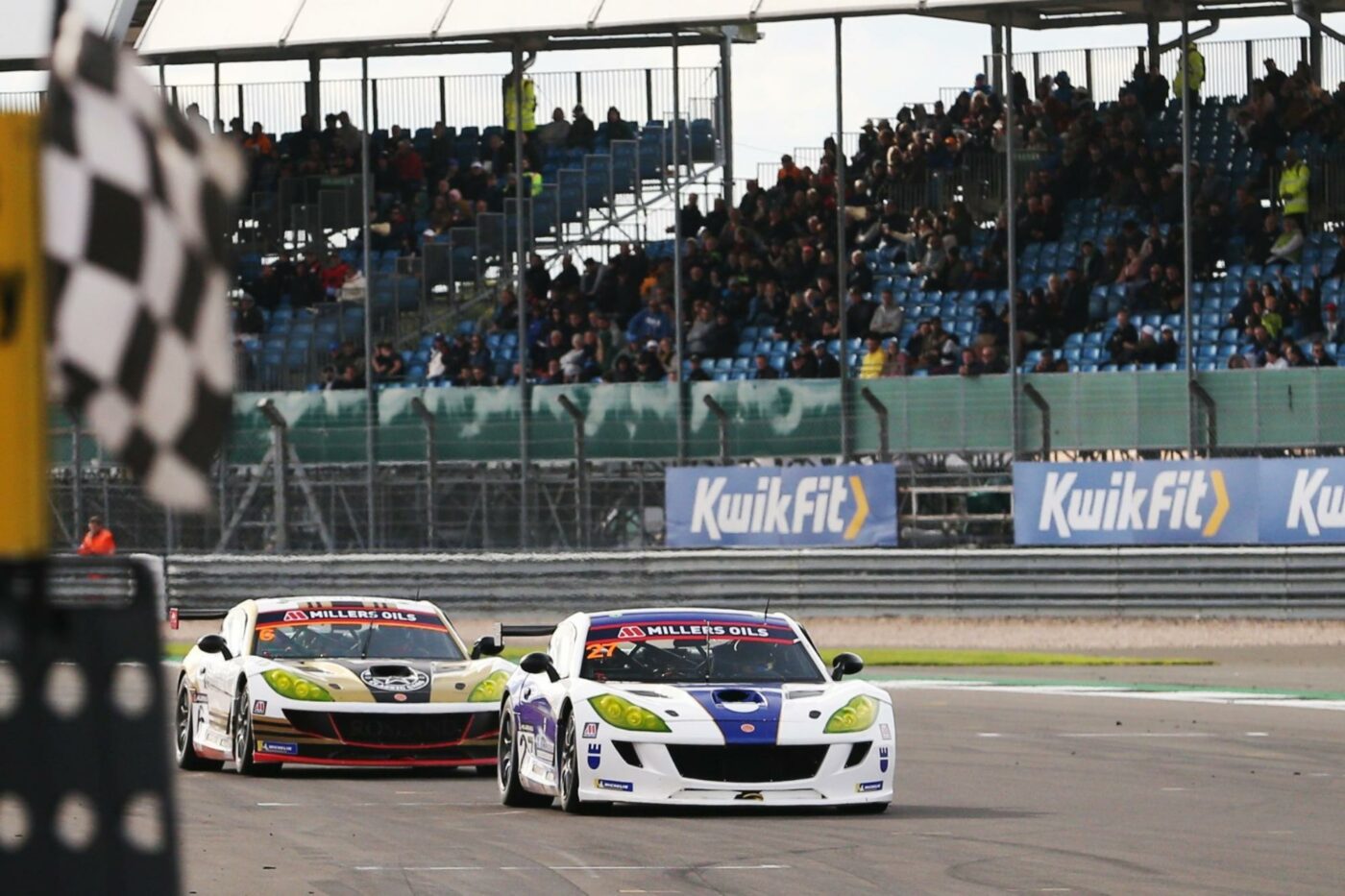 After seeing his 100% pole position record ended last time out at Thruxton, Kellett (Rosland Gold Racing by Century Motorsport) hit back to top the times in qualifying on Saturday morning. Emson (Elite Motorsport), the driver who ended that pole streak, was second quickest.

G56 Am runner Darren Leung (Assetto Motorsport) put together a great lap to finish third overall and secure his fifth G56 Am class pole of the year. Blake Angliss (Rosland Gold Racing by Century Motorsport) and Daniel Morris (Simon Green Motorsport) set the pace in G55 Pro and Am respectively.

A dramatic start to the opening race saw Kellett unable to get off the line due to a mechanical problem. Emson took full advantage to take the race lead and he didn’t look back, pulling seven seconds clear for his second win of the season.

Reece Somerfield (Breakell Racing) marked his return to the championship with a great second place result, while Leung held off a determined Henry Dawes (Century Motorsport) to finish third overall. Wes Pearce (Breakell Racing) was next up, finishing second in G56 Am behind Leung.

The most exciting battle of the race came for the G55 Pro honours, as Angliss fended off the challenge of James Taylor (SVG Motorsport) for the victory. Josh Poulain (Motus One) wasn’t far behind as he completed the class podium, with points leader Luke Reade (Wolf Motorsport) having pulled off circuit on the green flag lap.

The second race of the day was the rescheduled reverse grid race from Thruxton, which was unfortunately postponed that weekend. With only drivers who contested that event being eligible to take part, Somerfield, Dawes, Poulain and Halstead had to sit it out.

Leung started on pole position alongside Emson, however it was Kellett who ended the opening lap in front after a stunning move around the outside of Leung through Brooklands. From there he produced a characteristically dominant drive to finish eight seconds clear, securing himself a 12th victory to break the championship record for most wins in a single season.

Emson pulled off a similar move on Leung to ultimately finish second, while after fighting from the back of the grid to sixth in the opener, Aston Millar (DTO Motorsport) completed the top three. That came after unfortunate contact with Leung as they diced for third, which led to the latter’s retirement.

Pearce took full advantage of that to increase his G56 Am championship lead with a sixth win of the season. Once again a close duel in G55 Pro went the way of Angliss from Taylor, while Reade bouncing back from his race one retirement with a podium finish.

Morris joined Angliss in completing a perfect day with a second lights-to-flag win. Duggan doubled up on second place finishes, while Warr got the better of Townsend this time round to secure his seventh podium finish of the campaign.

Race three on Sunday afternoon saw one of the drives of the season, as Kellett stormed through from 16th on the grid to take a last gasp victory. It was Somerfield who led initially, getting ahead of Emson off the start line, however they swapped places later in the opening lap.

Behind, Kellett had gained 10 places on the opening lap alone and as he continued his charge, identical moves into Brooklands on Leung and Somerfield moved him up to second. He faced a two second gap to Emson out front and set about hunting him down.

At mid-distance the top two were nose-to-tail and Emson put in a great defensive drive, however on the final lap, Kellett got a switchback through Copse and dived down the inside at Becketts to secure the victory. Emson followed him home, with Somerfield third.

Leung finished up fourth on the road as he secured a dominant G56 Am class win ahead of Dawes, Pearce and Millar. Angliss enjoyed a comfortable drive to the G55 Pro win, finishing seven seconds clear of Reade.

Conner Garlick (Xentek Motorsport) bounced back from a double DNF the previous day with a class podium, while Morris once again won in G55 Am. Townsend passed his Fox Motorsport team-mate Duggan on the final lap for second, with Warr completing the class podium.

The reverse grid for the fourth and final race of the weekend placed Leung on pole. For the second race in a row it was Somerfield that led the field into Copse though and the championship stalwart went on to run out front for the opening few laps.

It changed on lap five though as Emson got through into Copse, before Kellett dived past too later in the lap. Those two went on to scrap it out for the race win once again and this time Emson kept his adversary behind for a third win of the season to keep his title hopes alive.

Somerfield followed them home to complete a hat-trick of podiums for the ‘Silverstone’ races, while Leung continued his title challenge in G56 Am with a third win of the weekend. Millar was fifth on the road, however a five second track limits penalty dropped him behind Dawes and Pearce.

Reade ended Angliss’ stranglehold on G55 Pro for the weekend with a crucial eighth win of the season to extend his points lead. A mechanical problem for Angliss dropped him off the podium, with Taylor coming from the back of the grid to second ahead of Garlick.

The weekend’s results mean that all four Millers Oils Ginetta GT4 SuperCup class champions will be crowned across the 2022 season finale at Brands Hatch in two weeks’ time (08/09 October).

Full race results from the weekend can be found at https://www.tsl-timing.com/event/223803